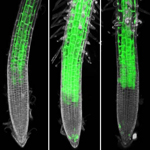 CHSpro:CHS-GFP is induced in the elongation zone of primary roots in response to IAA and ACC.

Auxin and ethylene are key regulators of plant growth and development, and thus the transcriptional networks that mediate responses to these hormones have been the subject of intense research. This study dissected the hormonal cross talk regulating the synthesis of flavonols and examined their impact on root growth and development. We analyzed the effects of auxin and an ethylene precursor on roots of wild-type and hormone-insensitive Arabidopsis (Arabidopsis thaliana) mutants at the transcript, protein, and metabolite levels at high spatial and temporal resolution. Indole-3-acetic acid (IAA) and 1-aminocyclopropane-1-carboxylic acid (ACC) differentially increased flavonol pathway transcripts and flavonol accumulation, altering the relative abundance of quercetin and kaempferol. The IAA, but not ACC, response is lost in the transport inhibitor response1 (tir1) auxin receptor mutant, while ACC responses, but not IAA responses, are lost in ethylene insensitive2 (ein2) and ethylene resistant1 (etr1) ethylene signaling mutants. A kinetic analysis identified increases in transcripts encoding the transcriptional regulators MYB12, Transparent Testa Glabra1, and Production of Anthocyanin Pigment after hormone treatments, which preceded increases in transcripts encoding flavonoid biosynthetic enzymes. In addition, myb12 mutants were insensitive to the effects of auxin and ethylene on flavonol metabolism. The equivalent phenotypes for transparent testa4 (tt4), which makes no flavonols, and tt7, which makes kaempferol but not quercetin, showed that quercetin derivatives are the inhibitors of basipetal root auxin transport, gravitropism, and elongation growth. Collectively, these experiments demonstrate that auxin and ethylene regulate flavonol biosynthesis through distinct signaling networks involving TIR1 and EIN2/ETR1, respectively, both of which converge on MYB12. This study also provides new evidence that quercetin is the flavonol that modulates basipetal auxin transport.