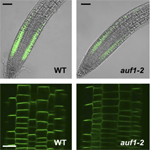 Plant root development is mediated by the concerted action of the auxin and cytokinin phytohormones, with cytokinin serving as an antagonist of auxin transport. Here, we identify the AUXIN UP-REGULATED F-BOX PROTEIN1 (AUF1) and its potential paralog AUF2 as important positive modifiers of root elongation that tether auxin movements to cytokinin signaling in Arabidopsis (Arabidopsis thaliana). The AUF1 mRNA level in roots is strongly up-regulated by auxin but not by other phytohormones. Whereas the auf1 single and auf1 auf2 double mutant roots grow normally without exogenous auxin and respond similarly to the wild type upon auxin application, their growth is hypersensitive to auxin transport inhibitors, with the mutant roots also having reduced basipetal and acropetal auxin transport. The effects of auf1 on auxin movements may be mediated in part by the misexpression of several PIN-FORMED (PIN) auxin efflux proteins, which for PIN2 reduces its abundance on the plasma membrane of root cells. auf1 roots are also hypersensitive to cytokinin and have increased expression of several components of cytokinin signaling. Kinematic analyses of root growth and localization of the cyclin B mitotic marker showed that AUF1 does not affect root cell division but promotes cytokinin-mediated cell expansion in the elongation/differentiation zone. Epistasis analyses implicate the cytokinin regulator ARR1 or its effector(s) as the target of the SKP1-Cullin1-F Box (SCF) ubiquitin ligases assembled with AUF1/2. Given the wide distribution of AUF1/2-type proteins among land plants, we propose that SCF(AUF1/2) provides additional cross talk between auxin and cytokinin, which modifies auxin distribution and ultimately root elongation.